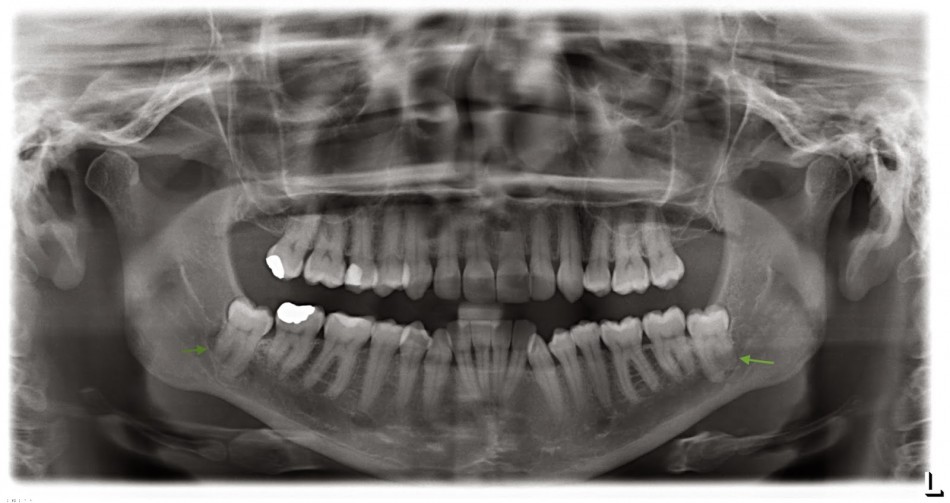 The problem of inferior alveolar nerve involvement during surgical procedure of the removal of lower third molars is often a source of litigations1,2,3. At the same time the impact of this on a person’s quality of life should not be overlooked.

Coronectomy or partial odontectomy reduces the likelihood of nerve injury by insuring retention of the vital roots when they are close or associated with the inferior alveolar nerve as evaluated by plain radiography or CBCT4,5.

The method aims to remove only the crown part of an impacted mandibular third molar while leaving the root and pulp undisturbed, thereby avoiding direct or indirect damage to the inferior alveolar nerve6,7,8.

Literature so far has hailed its merits and many practitioners regularly use the approach of coronectomy in order to minimise Inferior alveolar nerve injuries. This technique got in lime light in last decade although results are encouraging but long term outcome needs to be followed9,10.

This paper presents a comprehensive review on coronectomies and discusses indications, procedure and its complications. We are encouraged by the initial patients satisfaction and requires further long term assessment.

Coronectomy or partial odontectomy is the elective decoronation of a tooth and removal of tooth structure below the level of crest of the alveolar ridge with the intention of allowing the tissue to heal over the remaining vital roots maintaining their vitality and desirably with formation of bone over the roots. This is performed on lower third molars that have an intimate relationship with the inferior dental nerve (IDN) as an alternative to complete extraction of the tooth, thus reducing risk to the nerve. Reports of permanent nerve damage as a result of wisdom tooth removal have been reported in 1% to 4% of cases which is quite significant considering lower third molar removal is one of the most commonly performed oral surgery procedures. Review of the literature shows coronectomy procedure is becoming more commonly reported and recent studies show quite favourable outcomes when compared to extraction. Due to increasing amount of favourable evidence it will likely become a more common practice, and therefore it is important that general dental practitioners are familiar with the procedure, as patients may present with post op complications such as infection, dry socket in the short term following coronectomy and re-eruption of the roots which tends to present some time later, and thus clinicians will need to consider this in their differential diagnosis.

There are many factors to consider when treatment planning for coronectomy on a third molar tooth. History of the patient’s presenting complaint and a full medical history need to be taken. A patient who is medically compromised is not an ideal candidate for coronectomy due to risk of poor healing. Patients should not be immunocompromised (uncontrolled diabetes, long term steroid therapy, HIV) or due to have radiotherapy to the jaw5,11,12,13. 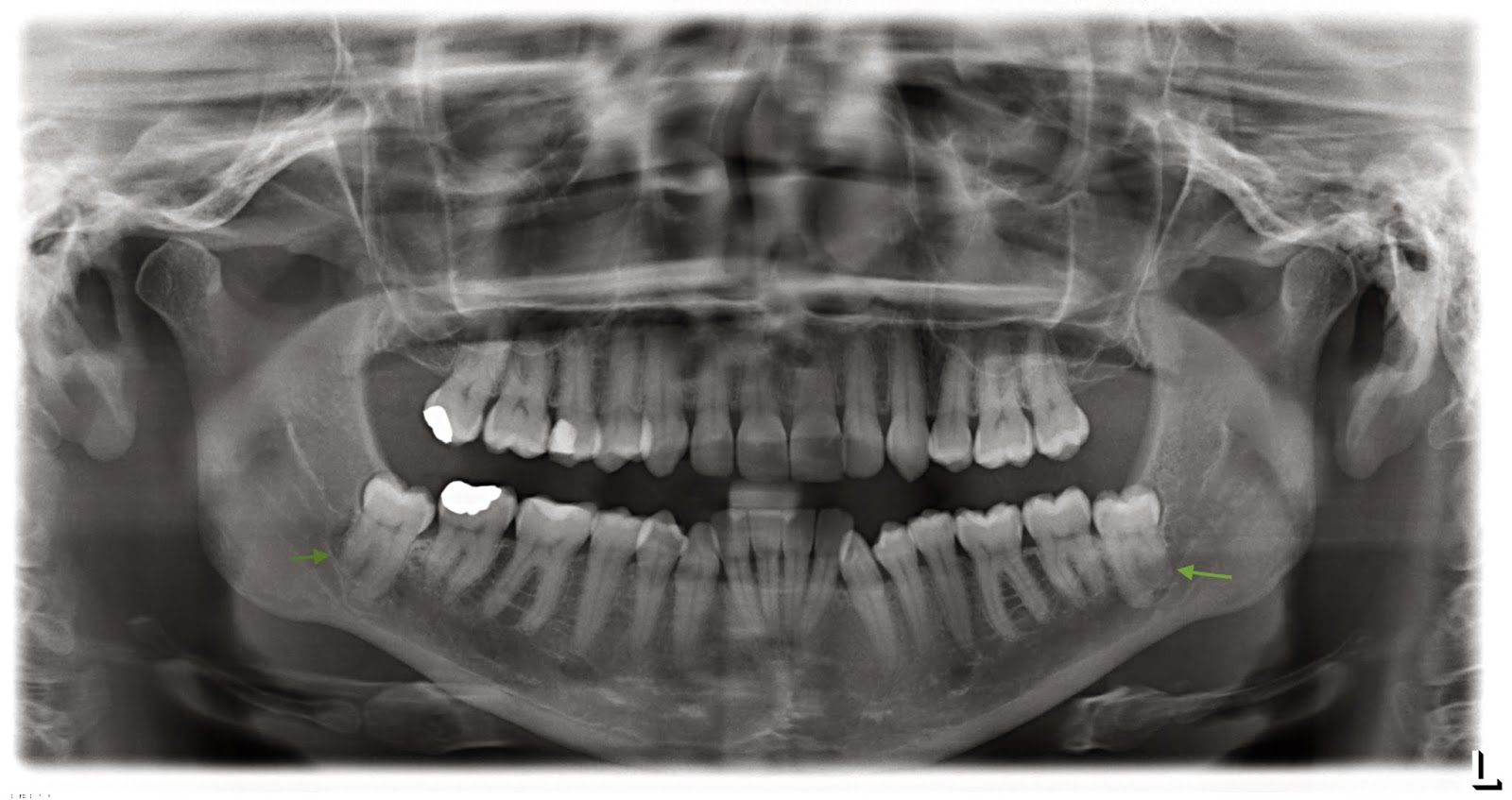 Fig 1: orthopantomogram showing a. darkening of root as the ID canal crosses b. interruption of the lamina dura of the canal c. narrowing of the canal as it passes over the root and d. sudden diversion of the course of the canal.

The tooth itself ideally should be non carious or in the very least not have any pulpal involvement or periapical infection. A non-vital tooth with a necrotic pulp is a source of infection and this is a contraindication for coronectomy. While most clinicians would find the idea of decoronating a tooth and leaving the pulp tissue in the roots somewhat counter-instinctive, evidence has shown that the tooth maintains its vitality. Histological examination of roots that erupted into the oral cavity following coronectomy shows vital pulp tissue in the canal, and also there are reports of roots being sensitive when they re-erupt which suggests vitality. In fact a control study by Sencimen et al 201012showed that roots that were endodontically treated actually had quite a high infection rate resulting in these roots requiring removal whereas in the control group there was no reports of infection. Also coronectomy is contraindicated in a horizontal tooth that is lying directly over the nerve as the process of decoronating the tooth may in fact result in damaging the nerve. Other contraindications include pre–existing tooth mobility, patients due to have orthognathic surgery on the mandible, and cystic tissue that is unlikely to resolve if left in situ8,9,17. Following assessment if it is determined that the third molar is suitable for coronectomy the implications of both procedures need to be explained to the patient and then fully informed consent is obtained for both coronectomy and full removal of the tooth. This is because if the root becomes mobilized during the procedure it will require removal. This is not uncommon and in one study 38% of teeth planned for coronectomy required removal due to mobilisation of the roots.

The most commonly described technique is as follows

A triangular full thickness buccal mucoperiosteal flap is raised; a lingual flap is not used.

A gutter of bone is made around the buccal aspect of the tooth to expose the cemento-enamel junction (CEJ).

A small elevator is used carefully to decoronate the tooth taking as much care as possible to apply as little torque as possible so as not to mobilise the roots. If the roots are mobilised then they will require removal.

A bur is then used to remove any pieces of enamel which may be present as enamel is non vascular and will be recognised by the body as a foreign body. Also the bur is used to reduce the root to at least 3mm below the level of the buccal and lingual alveolar crest.

The socket is then copiously irrigated to remove any debris.

The flap is then sutured with resorbable sutures. The aim of suturing is to completely close the surgical site, as the desire is to have healing by primary intention. This may require scoring of the periosteum to advance the flap over the surgical site3,5,7,9.

The patient is given the necessary post op instructions and is seen for post op review. Any post op complications are treated, as they would if it was an extraction. Patients are then seen for appropriate follow up. Patients have a panoramic X-Ray immediately post op (fig 2).

Further radiographs are then taken at the discretion of the clinician (fig 3). Any post-operative complications are dealt with, as they would be with an extraction: irrigation and alvogyl in the case of dry socket, antibiotics, irrigation with chlorhexidine and drainage in the case of infection. Should infection persist then extraction of the root is indicated. 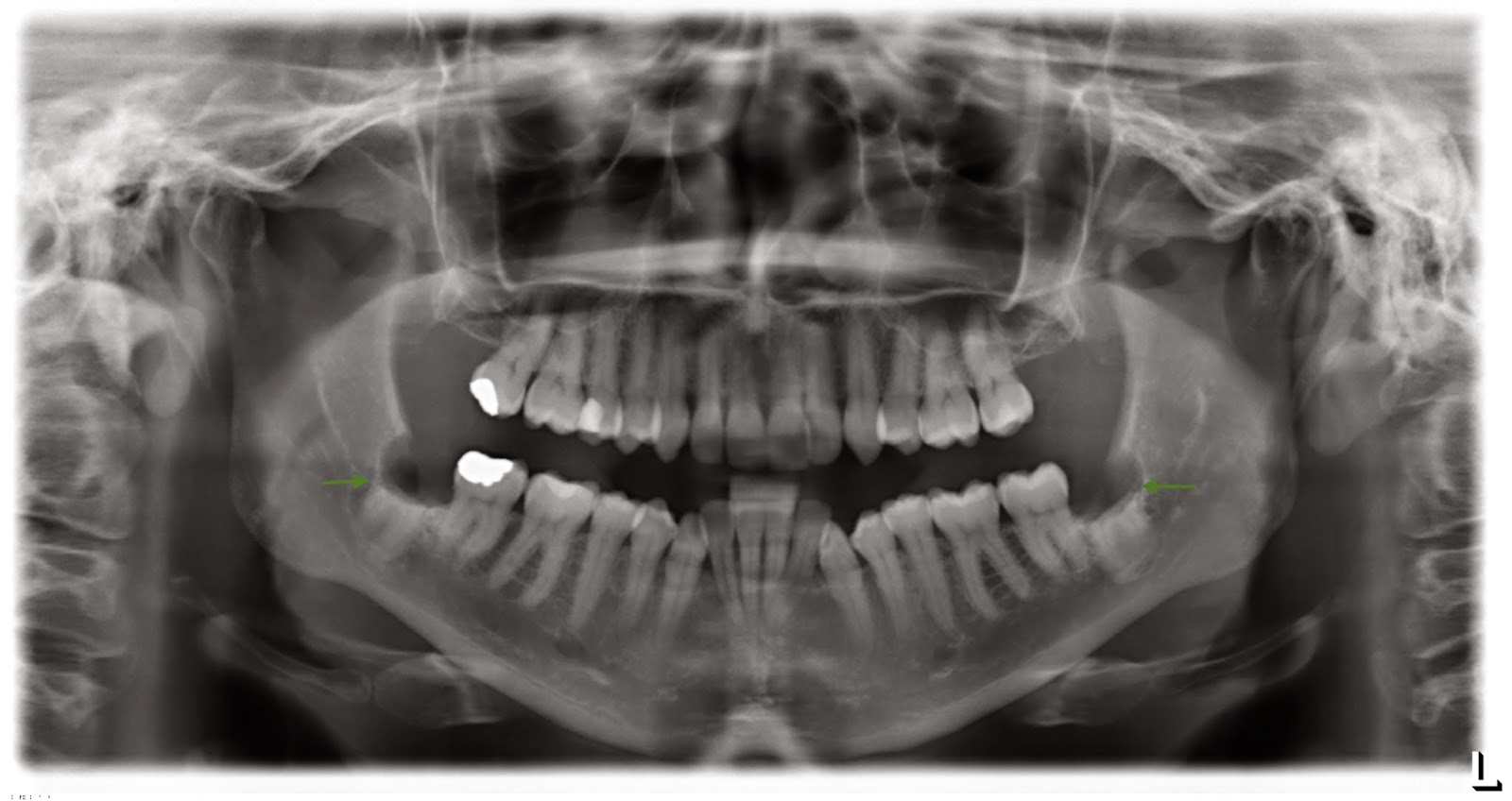 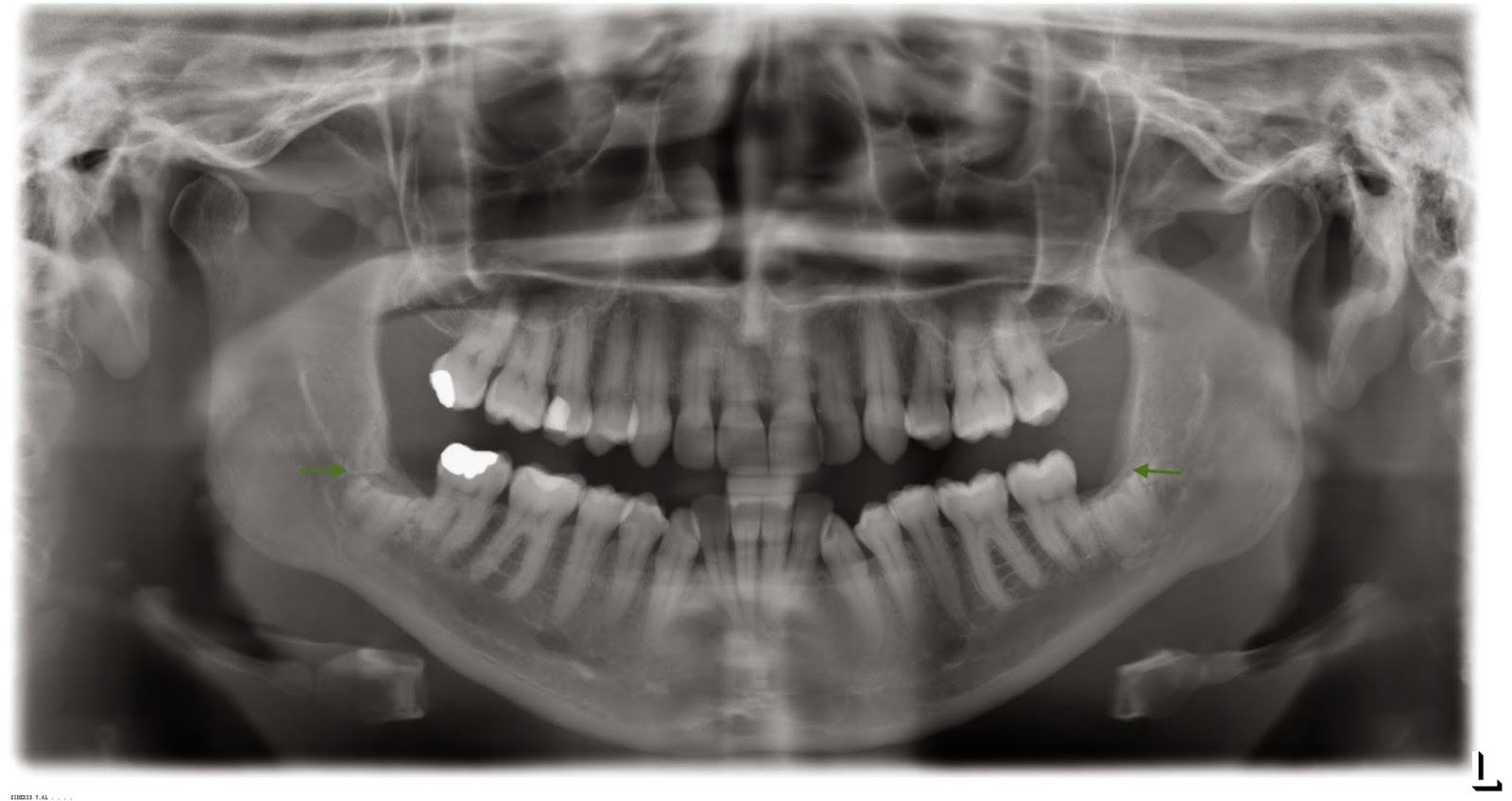 There are variations in technique described in the literature. Pogrel 20076 describes a technique of raising both a buccal and a lingual flap. The intention of the lingual flap is to protect the lingual nerve and the lingual plate. The crown is sectioned completely using a bur at an angle of 45. The aim is to completely transect the crown so it can be easily removed with a mosquito forceps, so as no to apply any torqueing forces to the roots thus reducing the chance of mobilisation8,10,13. A less commonly described technique is to use a rose head bur to remove crown tissue. The disadvantages to this are that it takes longer to perform the procedure and produces more debris, and as such is not commonly used. Some authors advocate prophylactic administration of antibiotics however this does not appear to be universal.

The Leung et al 20093 study consisted of a control group of extractions n=178 against a trial group of planned coronectomies n=171. Out of the trial group 16 coronectomies (9.4%) failed due to mobilisation of the roots and had to be extracted. Pain and dry socket were reported to be lower in the coronectomy group and there was no difference in infection rates in either group. 1 coronectomy patient required re-operation due to exposure of the root. In terms of IDN damage out of the extraction group, 9 (5.1%) presented with sensory deficit compared to 1 (0/65%) in the coronectomy group. While this does show quite favourable results the mean follow up time was quite short being less than 12 months.

Renton 20059 published a randomised study of consisting of 128 patients being treated for 196 third molars. The coronectomy group n=94 had quite a high failure rate in terms of mobilisation of roots (38%). No sensory deficit was reported in the coronectomy group whereas 19 nerves were damaged after extraction. There was no difference in the incidence of dry socket in either group, 5%. The mean follow up was 25 months. Hatano et al 200913 published a case control study. 220 wisdom teeth were divided into an extraction control group n=118 and a coronectomy group n=102. The mean follow up was 13 months in the control group and 13.5 months in the coronectomy group. 6 cases of IDN damage were reported in the extraction group compared to 1 in the coronectomy group. 4 of the coronectomy roots had to be subsequently removed due to post-operative infection, and out of these 4 there was no nerve damage. Pogrel et al 20047 performed 50 coronectomies on 41 patients. A lingual flap was raised for each coronectomy. There were no cases of IDN damage and one case of lingual nerve deficient, which subsequently resolved. 1 patient required removal of both roots because of failure to heal and another patient required removal of a root due to migration to the surface. X-rays were taken immediately post op and after 6 months and root migration was evident in 30% of patients.

Dolanmaz14 in a study of 47 coronectomies reported a mean eruption of 4mm at 24 months. Knutsson16 1989 reported the most migration of up to 7mm after 1 year. It can be argued that with re-eruption patients may require two procedures rather than one, thus questioning the efficacy of coronectomy. Most authors report in cases where roots re-erupt they migrate away from the IDN and therefore a counter argument could be made that taking the nerve into account, this is safer, the outcome is ultimately the same as a planned extraction and considering the effect that permanent nerve damage could have on a patient’s quality of life then this is a much more favourable outcome. However there has been a case reported of the IDN migrating with the tooth as it re-erupted following coronectomy, but this is quite a rare finding.

As an alternative to extraction of lower third molars with an established high risk to the inferior dental nerve coronectomy offers a safe alternative. The evidence that is emerging is quite positive and in general shows good outcomes when compared to extraction. As there is less radiation associated with cone beam CT than standard CT it has become more justifiable to assess third molars using this technology. This has allowed more accurate assessment of third molars and therefore it is likely in time coronectomy will become a much more routine procedure. Further research is required as there is little evidence in terms of long-term studies.